21 Turtle Creek Condominiums, known simply as “21,” is one of Dallas’ first residential high-rises. The area today occupied by 21 and the Turtle Creek Village shopping center was once the site of Holy Trinity College. The imposing brick building, built in the late 1880s, dominated the landscape and was visible from several blocks away. Holy Trinity, which became the University of Dallas in the early years of the 20th century, occupied the spot until the 1940s when Jesuit High School took over the old college building.

In 1963, Jesuit moved to its new location in North Dallas, and the area bounded by Oak Lawn Avenue, Blackburn, Turtle Creek Boulevard and Irving Avenue became home to office and residential towers and a shopping center. Built in 1963 on the old school grounds, 21 Turtle Creek was the premier residential address in Dallas. 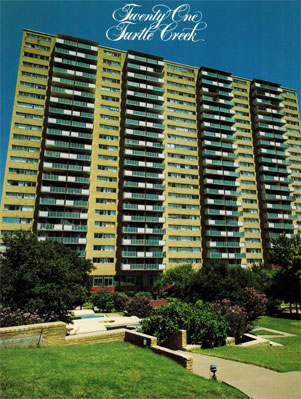 Several years ago, a story about Jack Ruby appeared in the Dallas Morning News. According to the late Tony Zoppi, entertainment columnist for the Dallas Morning News in the early 1960s, just before the assassination of Lee Harvey Oswald, Jack Ruby planned to move to an apartment at 21. The rent, at $195, was substantially more than what he’d been paying for his apartment in Oak Cliff. The newspaperman was suitably impressed and told Ruby so. Ruby replied, “Tony, I’ve skimped all my life. Now I want to live a little.”

Ruby never moved into his new apartment, however. He was in jail for the assassination of Oswald on the day he had been supposed to move. (Dallas Morning News, Sunday, Feb. 22, 2001.)

The building was quite different in those days. The ground floor and terrace levels, where today there are luxury residences, were occupied by businesses including a nightclub, a beauty salon and a shoe repair shop. There was even a President’s Health Club, one of the first in Dallas.

In recent years, 21 has undergone a series of significant improvements. A major renovation project was launched in 2009, and our building has had an extensive makeover, inside as well as out.

These days, 21 Turtle Creek is proudly embracing its mid-century origins while maintaining the upscale and elegant atmosphere to be expected of a prestigious Turtle Creek address. The residents here are proud of our building and our community as 21 begins its second half-century.